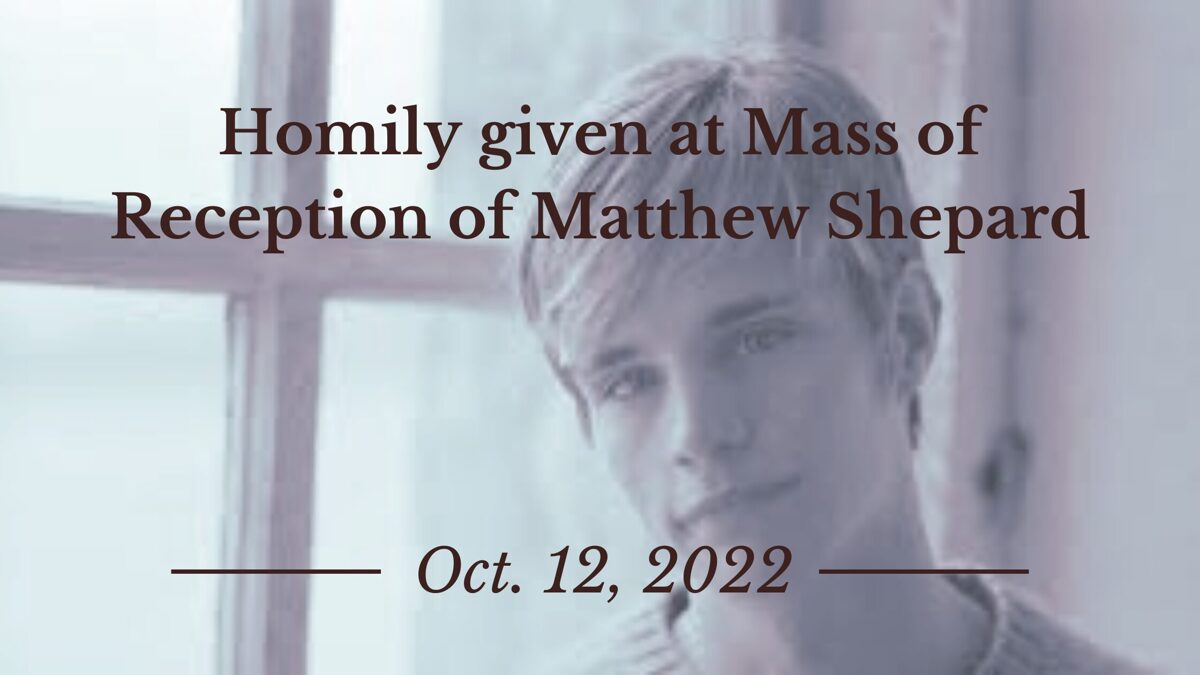 I’d like to start off with a couple of lines from a poem called “A Prayer of Queer Thanksgiving” by Micah Bucey, Associate Minister of Judson Memorial Church, NYC.

We are a rainbow and we are a cloud,Born of color and tears, of triumph and tragedy,Feeding the arc of a moral universe that has trampled us,Even as we decorate the damn thing and teach it how to bend.

When I first read that poem, the last two lines of what I just quoted really hit me because, right now, it does feel like the arc of the moral universe is trampling us. And while I love the message of today’s Gospel, sometimes it doesn’t feel like a blessing when people revile you and persecute you and utter all kinds of evil against you falsely.

It’s sad and exhausting and it hurts. And, nevertheless, us queer people, we persist! Or as a friend of mine recently said, “the more we’re trampled, the more glitter comes out and you can’t get rid of glitter.”

Today we remember and honor Matthew Shepard, our queer brother who was essentially crucified on that fence near Laramie, Wyoming, simply for being queer. He was not the first person and, sadly, not the last to be persecuted for being queer.

Since October is LGBTQ+ History Month, I thought it fitting to mention some of the many queer heroes and martyrs that came before and after Matthew, like...

Marsha P. Johnson, a gay liberation activist and self-identified drag queen, who was one of the prominent figures in the Stonewall uprising in 1969. Marsha was found floating in the Hudson River shortly after the gay pride parade in 1992.

One of the most horrific cases of terror and brutality on the LGBT community was the torching of the UpStairs Lounge in New Orleans on June 24, 1973. The bar was known as a place frequented by parishioners of the Metropolitan Community Church (MCC), a gay-founded religious organization. This horrible act of terrorism claimed the lives of 32 people, many of them queer parishioners at the nearby MCC, and injured many others.

These are just a few examples, among many, of queer people murdered in hate. Sadly, there are many others that didn’t rise to the level of headline news. And I wanted to mention them, not to send us into a deep depression, but because they are all equally beloved and deserving of being remembered.

So, I just want to offer up their names today, both known and unknown.

So, what are we to do as people of faith when it feels like the arc of the moral universe is trampling us?

The answer to that question for Christians is simple, but not easy. It’s to do what Jesus commanded us to do: love God with all our heart, soul and mind and love our neighbors as ourselves. This is what Matthew Shepard was doing when he forgave that bartender who punched him in the face. And this is what we are called to do; this is HOW we will overcome hatred.

Our task is to be obedient all our lives to the Will of God for the world. And therein lies the difference between being good for nothing and good for something. Between religion for show and religion for real. Between personal spirituality that dedicates itself to achieving private sanctification and prophetic spirituality, the other half of the Christian dispensation.Yes, the Christian ideal is personal goodness, of course, but personal goodness requires that we be more than pious, more than faithful to the system, more than mere card-carrying members of the Christian community. Christianity requires, as well, that we each be so much a prophetic presence that our corner of the world becomes a better place because we have been there.

This is the antidote to depression in the face of oppression. This is how parents of a crucified child live their son’s love forward. This is the way in which we let all our gay glitter out into a world in desperate need of love and compassion.

I don’t mean this to be disrespectful, but all that “I’m not enough” thinking is just in your head. YOU are created in God’s image and so you ARE enough. You were born utterly unique; with gifts and talents the world is waiting to receive. But when you tell yourself that you’re not enough, enough times, you believe it and it becomes a self-limiting, self-fulfilling prophecy.

So, all of us need to start telling ourselves that we ARE uniquely enough so that we can get on with the work of being prophets in our time, as we were born to do. And I think it’s helpful to remember we’re not doing this work alone. We are in prophetic community with people like:

Bishop Yvette Flunder, founder of City of Refuge United Church of Christ and Presiding Bishop of The Fellowship of Affirming Ministries, who blends proclamation, worship, service, and advocacy on behalf of those most marginalized in church and in society.

Carmen Morgan, founder and director of artEquity who has worked in the non-profit sector for over 20 years. She’s a national activist dedicated to community building and activism, who has worked tirelessly leading conversations at the forefront of the field on equity, diversity, and inclusion issues.

Kittredge Cherry, founder and publisher of Q Spirit, Metropolitan Community Churches clergy, lesbian Christian and historian whose detailed and time-consuming work serves as both education and historical preservation for the queer community.

Our own Bishop Brenda Bos, the first woman to serve as bishop in the Southwest California Synod, and the first openly lesbian bishop to serve the Evangelical Lutheran Church in America.

We have a choice to make, my friends. Will we play small because we don’t feel worthy, or we don’t know what to do? OR will we stand alongside these modern-day prophets, honoring our unique gifts, so needed in our troubled times?

How will we make our corner of the world a better place?

That is the question I am asking myself and I pray, in the name of all that is holy, that you ask that question of yourself.   Amen